One of the most important public transit rail service in Kuala Lumpur will finally open to the public in coming August. The MRT Line 1 opened partially in December 2016 between Sungai Buloh and Semantan in the Greater Klang Valley. The 14 first stations connect mostly the upper class area of Damansara as well as two important shopping centres situated next to each other, the Curve and IKEA Mutiara Damansara. However, it is so far not connected to other LRT or Commuter lines. The MRT Line 1 is fully automated and is the second driverless rail system in the Malaysian metropolis.

Most important will be the opening of Phase 2 slated to be operational by next August. The new Line will indeed pass through many tourist attractions of the capital as well as finally properly connect Bukit Bintang to Kuala Lumpur historical city centre with a fully efficient public transport -in contrary to the ageing Monorail Line with its very limited capacity and travel speed!

The line will stop next to the old rail station and Muzium Negara. The new station will be like a museum on its own as it will tell about the history of public transport in Kuala Lumpur. It will also be linked by a perdestrian walkway to the nearby KL Sentral station, the city multimodal rail hub.

The line will then stop at Pasar Seni (Art and Craft Market, formerly the Central Market) and Merdeka, the parade field which has been for a long time the heart of Kuala Lumpur urban life with its beautiful Moorish style buildings. It will then arrive in Bukit Bintang, KL most popular tourist area with its myriad of shopping malls and hotels before going to Tun Razak Exchange before heading into the suburbian cities of Cheras and Kajang. 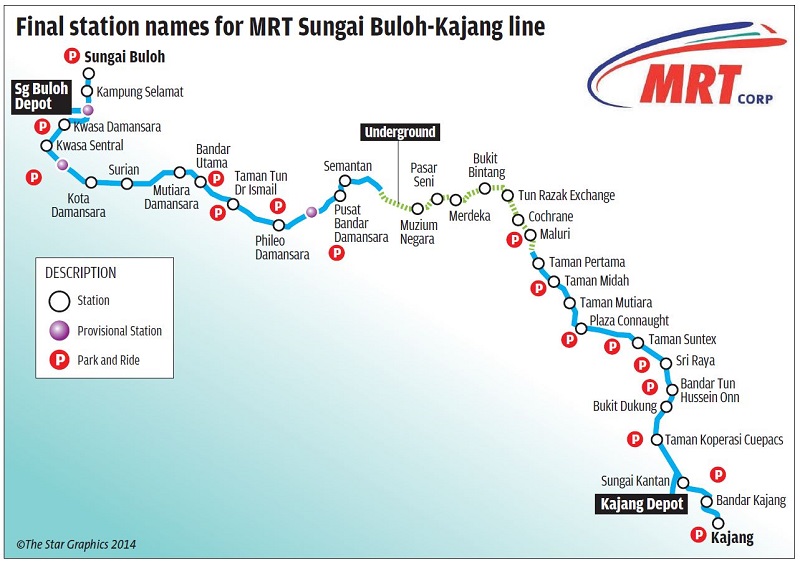 Bukit Bintang has been in a terrible mess for the last three years due to the MRT construction which blocked most of the roads and side streets. It will certainly come as a welcome relieve for both inhabitants and visitors to KL commercial heart.

While the direct connection to Kajang will allow commuters to enjoy savoury chicken and beef satay, a well-known specialty of that city!

Line 1 length totals 51 km including 9.5 km underground with 34 stations. Two other MRT lines are due to open in the near future: Line 2 will connect Sungei Buloh to Serdang and Putrajaya with an expected opening in 2021 while Line 3 will be a circle rail service connecting most other transit rail lines together. It is still under study and could then be completed around 2025.

Malaysia Revises the Implementation of its Tourism Tax