The Tourism Authority of Thailand (TAT) is joining hands with more than 40 public and private organisations to stage the ‘Amazing Thai Taste Festival 2017’ in Bangkok. Scheduled to take place from 8-11 June in the area around the Airport Rail Link Makkasan Station, the event will showcase authentic cuisine of Thailand in a range of meaningful and fun-filled activities.

The event is taking place as polemics raged recently over Bangkok Metropolitan Authority (BMA) decision to let street food – a strong element of Bangkok’s appeal- disappear in most areas but a few ones designated as “tourist places”. Although BMA since made backpedal, consequences are already visible with many food outlets gone in popular areas in Siam, Sukhumvit or Silom.

Celebrating Thai food appears as a necessity to diffuse the idea of a hostile administration. And the festival is a perfect opportunity. Mr. Kalin Sarasin, Chairman of the Board of TAT said, “The Festival is part of the Amazing Thai Taste campaign, which was launched in 2016 to promote the many aspects of Thai food and to encourage both Thais and visitors to discover distinct Thai tastes. As a result, the campaign can play a part in helping to generate sustainable income for farmers, food producers and restaurants.” 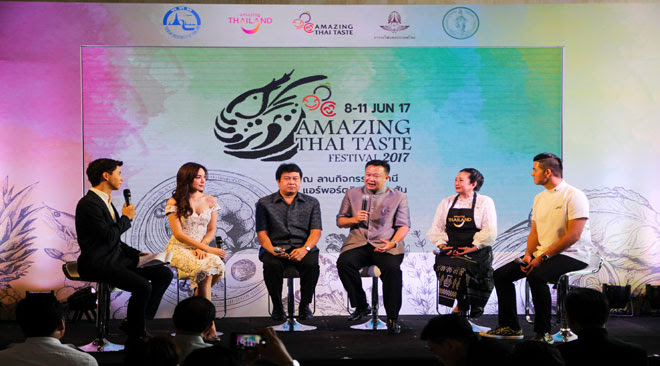 The four-day Amazing Thai Taste Festival 2017 will consequently showcase the characteristics of Thai cuisine in 10 distinctive zones – local food, royal cuisine, partner and foodie tour, Thai herb and organic, local fruit, fruit buffet, street food, fusion and celebrity, food innovation and food truck. All are designed to offer everyone the chance to experience the very best of Thai cuisine, from fresh ingredients to sumptuous dishes and traditional cooking methods and innovative recipes. There will be booths by famous street food stalls and fine-dining restaurants as well as certified local eateries.

On each day of the festival, there will be activities taking place including cooking demonstrations of dishes from around the country, cooking shows by Thai celebrity chefs, culinary competitions and the sale of fresh ingredients, including herbs, fruits, and vegetables. There will also be daily music and entertainment to enjoy.

The Amazing Thai Taste Festival 2017 is one of the four key activities under the Amazing Thai Taste Campaign, including promoting six Thai dishes – Phat Thai, Tom Yum Kung, Green Curry, Som Tam, Massaman and Tom Kha Kai as well as seasonal Thai fruits; such as, durian, rambutan, mangosteen and pineapple. This is in line with the campaign’s three main aims: to improve income distribution nationwide; to raise income for the country and to promote sustainable tourism.

Mr. Yuthasak Supasorn, TAT Governor said, “With so many small and grassroots communities up and down Thailand being directly involved in fruit, rice and general food production, promotion of Thai food helps them to sell their crops and to create a strong international brand for Thai food and ingredients. At the same time, we can use Thai cuisine to drive tourism and boost spending.”

“Thai food is something that all visitors to Thailand enjoy, and for locals, our national cuisine is an obsession. After all, food production and dining plays a huge part in Thailand’s economy and tourism sector and deserves to be celebrated on an international level,” Mr Yuthasak concluded.

Full Open-Skies from Now on Between Cambodia and Thailand

TAT and THAI to Promote Together 60th Anniversary