Nattaporn Jatusripitak, an adviser to Prime Minister’s Office, told reporters after the Cabinet meeting that the terms of reference, defining what is to be achieved and how, will be drafted as soon as possible, following by a bidding process.

He said the investment will be in the form of a public-private partnership, allowing the private sector to engage in the project in cooperation with whatever government agencies are in charge of it.

The high speed train will link Suvarnabhumi and Don Mueang airports that both serve Bangkok, and U-Tapao, a joint civil-military public airport that serves the cities of Rayong and Pattaya on Thailand’s eastern seaboard but could also serve Bangkok once rail connection opened.

The 220-kilometre rail project is part of the Eastern Economic Corridor, the government’s flagship project for the development of infrastructure in Thailand’s eastern seaboard, covering Rayong, Chachoengsao and Chonburi provinces.

The cabinet also decided Tuesday to include the areas surrounding Don Mueang and Suvarnabhumi airports in the EEC for further economic development. 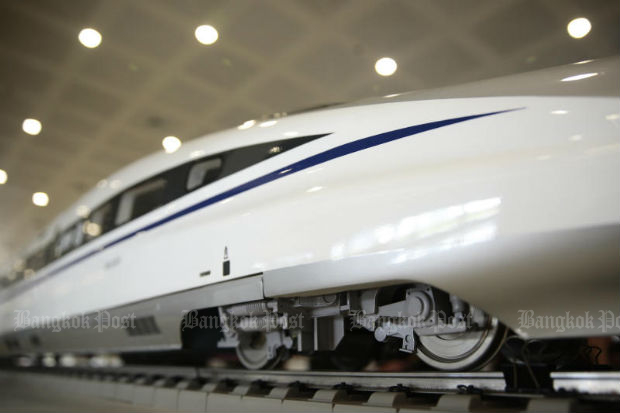 Industry Minister Uttama Savanayana said on Monday that at speeds of up to 250km per hour, the train will take 45 minutes from Bangkok to U-Tapao airport, compared to 2-3 hours by car. It will initially have five stations: Chachoengsao, Chon Buri, Si Racha, Pattaya and U-Tapao.

The fares from Makkasan in Bangkok are estimated at 270 baht to Pattaya and 330 baht to U-Tapao airport, he said.

The extensions will reduce the travel time from Bangkok to Rayong to one hour, 100 minutes to Chanthaburi and 120 minutes to Trat, he said.

According to the EEC website, the rail project runs through Bangkok, Samut Prakan, Chachoengsao, Chon Buri and Rayong.

The standard-gauge rail project will use the existing structures of Airport Rail Link and State Railway of Thailand. One extension is from the existing Phayathai station to Don Mueang station while the other runs from Lat Krabang to U-Tapao and Rayong with a link to the airports.

The speeds will be 160km per hour in downtown and up to 250km per hour outside. It will have 10 stations: Don Mueang, Bang Sue, Makkasan, Suvarnabhumi, Chachoengsao, Chon Buri, Si Racha, Pattaya, U-Tapao and Rayong.