Asia Pacific remains solidly on the path to welcome close to one billion international visitor arrivals (IVAs) over the next five years. This is one of the key predictions from the Executive Summary of the Asia Pacific Visitor Forecasts 2020-2024, released by the Pacific Asia Travel Association (PATA). Covering the years 2019 to 2024 and 39 destinations within the region, these forecasts anticipate a volume of over 971 million international visitor arrivals into Asia Pacific, by 2024.

The strong increase in International Visitors Arrivals (IVA) has been driven by the average annual growth rate (AAGR) of 5.3% between 2014 and 2019, and that momentum is expected to increase even further over the next five years, to average 6.3% per annum between 2019 and 2024. This will result in an acceleration of more than 256 million additional IVAs into the region between 2019 and 2024, a significant increase over the additional volume of 162 million added between 2014 and 2019. The distribution of these IVAs in Asia Pacific is expected to change only marginally from 2019, with the Asia and Pacific regions expected to show some relative, as well as absolute increases in arrival numbers.

Asia is forecast to remain as the dominant destination region and is likely to improve its relative share to over 77% by 2024.The Americas will come in second, although its share is expected to reduce slightly over the period between 2019 and 2024.

As a generator of IVAs into and across Asia Pacific however, Asia is predicted to continue growing in relative share, accounting for almost 68% of all IVAs into the region in 2024. This is likely to be at the expense of both the Americas and Europe, both of which are predicted to wane, at least in terms of their respective shares as source regions for Asia Pacific, between 2014 and 2024.

Eleven Asia Pacific destinations are predicted to each receive more than 10 million additional IVAs between 2019 and 2024, with China leading the way, expecting to add around 38.2 million more arrivals to its inbound count and raising the aggregate volume to almost 208 million in 2024. 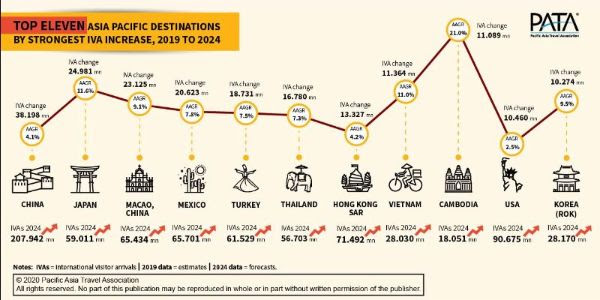 Japan is ranked next, followed by Macao, China and then Mexico, with all of these destinations expected to receive more than 20 million additional foreign arrivals each, over the forecast period to 2024.

The top group of 11 destinations is likely to account for 77% of the IVA volume into Asia Pacific in 2024 and more than three-quarters of the additional arrivals over that same period.

In addition, it is predicted that nine out of ten destinations will have AAGRs between 2019 and 2024 in excess of 10%, ranging from 10.2% for the Maldives to 21% for Cambodia. The volume bases for each of these destinations vary widely, however these very strong average rates of growth are certainly worth closely watching over the forecast period.

The top ten strongest source markets into Asia Pacific between 2019 and 2024 are forecast to include China, the Republic of Korea and Hong Kong SAR in the top three positions, generating a collective volume of more than 369 million IVAs over that period. These three source markets alone are also predicted to generate an additional volume of more than 106 million IVAs into Asia Pacific over the same period. 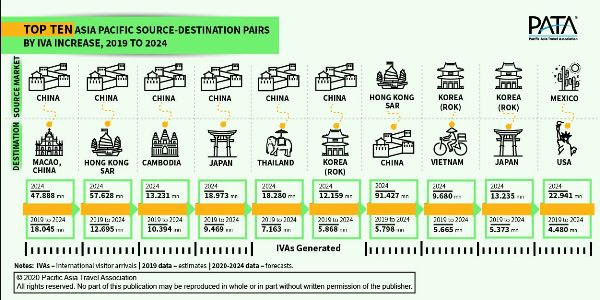 Adjusting for the Greater China source-destination pairs, the importance of China for a number of other Asia Pacific destinations becomes obvious, with China appearing five out of the possible ten times, as a major source market.

In commenting on these forecasts, PATA CEO Mario Hardy points out that, “For many destinations, there is now an immediate and necessary shift from generating arrivals to properly managing those visitors. It is no longer enough to think and talk about this, the time to put into action such management practices that ensure that visitors into and across the Asia Pacific region receive a superlative and memorable experience is now.”

“The tourism juggernaut is a reality, and this means that, as a socio-economic sector, travel and tourism needs to ensure that it has the necessary mindset and infrastructure – both hard and soft – to enable growth of this magnitude to be properly managed. It is incumbent upon us all to deliver both memorable experiences and positive outcomes for visitors, residents and the environment in equal measure.”

Timor Leste Looks at China for Investments and More…